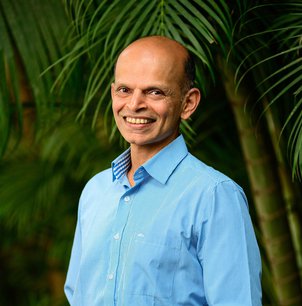 Throughout his career, be it as a business lead at Cisco or as a co‐founder of Snapfish, the world's largest photo site acquired by HP or at Transarc, which was acquired by IBM, Shripati has combined his passion to build great teams, an extraordinary desire to excel and a keen eye for spotting the tales. He is known for being astute with a razor sharp intellect and a Zen‐like devotion to data driven decision‐making.

Shripati has also worked alongside Mr. Nandan Nilekani on the UIDAI project. Having spent substantial parts of working career in the United States and India addressing worldwide markets, Shripati brings a global management perspective. His passion for Indian business was seeded when he interned for Boston Consulting Group in India and has grown through investments in and mentoring of Indian online startups over the last decade. Shripati enjoys the great outdoors and has hitchhiked through Europe and trekked the wind swept mountains of the Himalayas and the Andes.

A firm believer in healthy living, Shripati diligently practises competitive yoga and interactive meditation and a deforestation diet ‐ every organic shop in Bangalore has his number on speed dial.