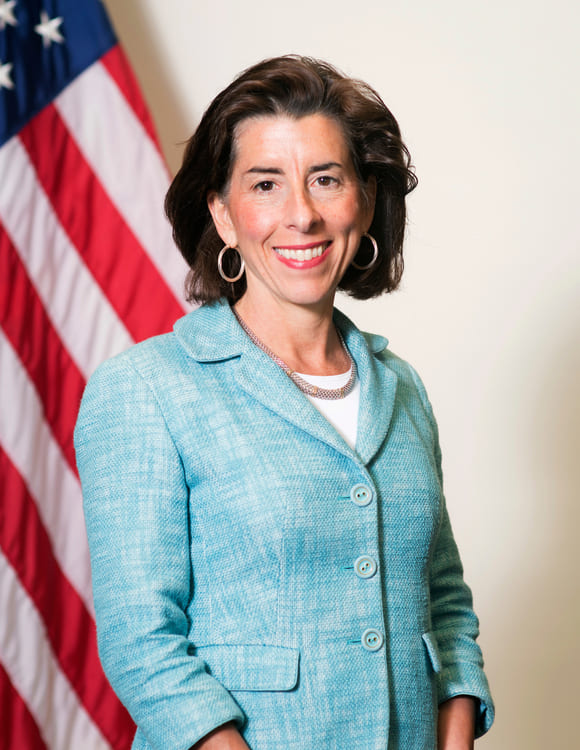 Gina M. Raimondo serves as the 40th U.S. Secretary of Commerce. She is focused on a simple but vital mission — to spur good-paying jobs, empower entrepreneurs to innovate and grow, and help American workers and businesses compete. Secretary Raimondo was formerly the 75th Governor of Rhode Island and its first woman governor.Secretary Raimondo grew up in a close-knit Italian family in Rhode Island. She graduated with honors from Harvard and won a Rhodes Scholarship to Oxford University where she earned a doctorate and met her future husband Andy Moffit. She later graduated from Yale Law School and clerked for US District Judge Kimba Wood. Secretary Raimondo also served as founding employee and senior vice president at Village Ventures, before she returned home to Rhode Island and founded Point Judith Capital, which was the state’s only venture capital firm.In November 2010, Secretary Raimondo was elected to serve as General Treasurer of Rhode Island, receiving the largest number of votes of any statewide candidate. When she took office as General Treasurer, she tackled the state's $7 billion unfunded pension liability.During her time as Governor, Secretary Raimondo kick-started the state’s economy and made record investments in infrastructure, education, and job training. She focused tirelessly on creating economic opportunities and good-paying jobs for all Rhode Islanders.