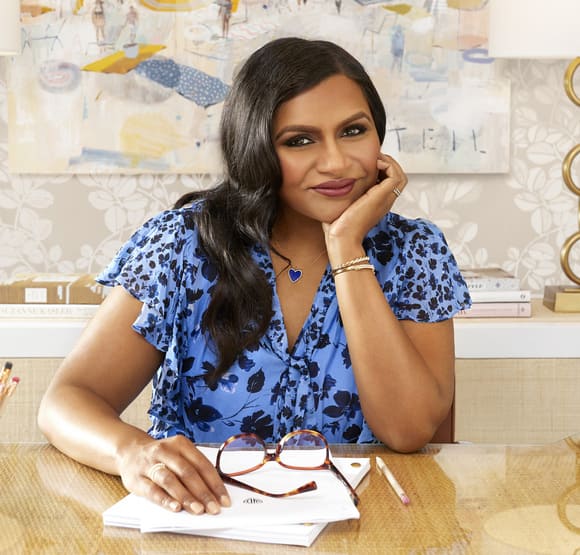 Emmy-nominated writer, producer, New YorkTimes best-selling author, director and actor Mindy Kaling has been named one of the brightest voices of her generation. At 24, Kaling joined the eight person writing staff at NBC’s “The Office”. During her eight seasons at the show, she wrote twenty-six episodes (more than any other writer) and was nominated for an Emmy—the first for a woman of color in any writing category.

Next Kaling created the “The Mindy Project” for Universal Television, a show that she starred in and executive produced from 2012 to 2017. Kaling wrote 24episodes of the 117 episodes created for the six season series.

In 2012, Kaling was named to the Time 100 Most Influential People in the WorldList.  She was honored with the 2014 Glamour Women of the Year Award and most recently was a 2019 ELLE Women In Hollywood honoree.

Kaling’s latest release is the critically acclaimed series, “Never Have I Ever”for Netflix. Season 1 reached 40 million homes in its first four weeks of release and has been picked up for a second season by Netflix. Recently, it was announced that Kaling will write, produce and star in an untitled comedy forUniversal opposite Priyanka Chopra, co-written with Dan Goor. The duo are also currently penning “Legally Blonde 3” which will star Reese Witherspoon. Kaling is also currently working on her HBO Max series, “The Sex Lives Of CollegeGirls”.

In between all her ventures, Kaling has released two New York Times best selling comedic memoirs⁠: “Is Everyone HangingOut Without Me? (And Other Concerns)” and “WhyNot Me?”,and in Oct 2020 she released a new collection of essays in partnership withAmazon called “Nothing Like I Imagined.”