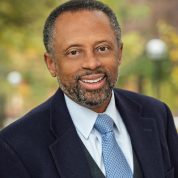 Center for Social Solutions/University of Michigan

Earl Lewis is the Thomas C. Holt Distinguished University Professor of history, Afroamerican and African Studies, and Public Policy and director of the Center for Social Solutions. From March 2013-2018, he served as President of The Andrew W. Mellon Foundation. An author and esteemed social historian, he is past President of the Organization of American Historians. A fellow of the American Academy of Arts and Sciences (2008) and the recipient of eleven honorary degrees, he has held faculty and administrative appointments at Michigan (1989-2004) and the University of California, Berkeley (1984-89). From 2004-2012, he served as Emory University’s Provost and Executive Vice President for Academic Affairs and the Asa Griggs Candler Professor of History and African American Studies. In addition to prior service on a number of nonprofit and governmental boards, Lewis chairs the board of Regents at Concordia College, is a trustee of ETS and a director of 2U and the Capital Group, American Funds.