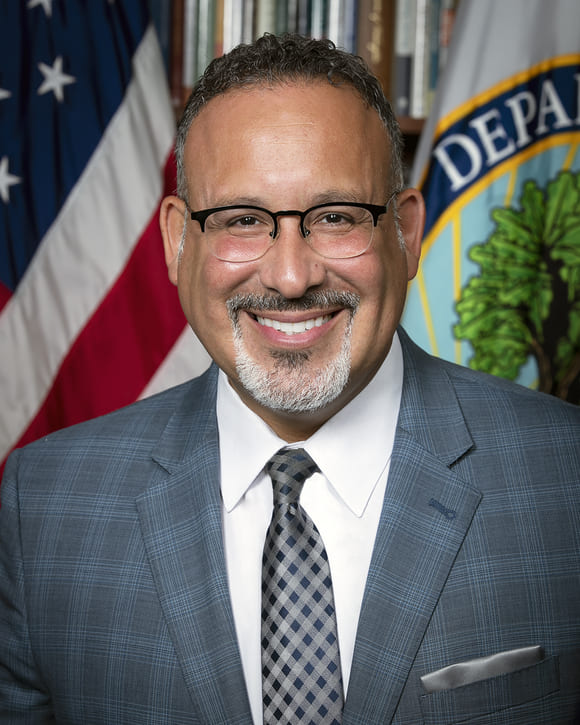 Dr. Miguel A. Cardona currently serves as the 12th Secretary of Education. Secretary Cardona is a lifelong resident of Meriden Connecticut and is proud alumnus of Meriden Public School. Following his time in Meriden Public Schools, he attended CCSU for his bachelor’s degree and UCONN where he completed Master’s in Bilingual/Bicultural Education, Administrator Preparation Program, Doctorate in Education, and Executive Leadership Program (Superintendent) Certificate.

Since beginning his journey as an educator Secretary Cardona has served as an elementary school teacher, school principal, the Performance and Evaluation lead administrator, Assistant Superintendent, and most recently Commissioner of Education for the State of Connecticut. Under Secretary Cardona’s oversight - despite the pandemic - Connecticut launched a statewide FAFSA Data Dashboard; procured a comprehensive statewide Special Education Data System (CT-SEDS); announced the State’s highest ever extended graduation rates for students with disabilities and English Learners; reached a new stipulated agreement in the landmark school integration case Sheff v. O’Neill, established the first national requirement for high schools provide courses on Black and Latino studies; and initiated systemic improvement protocols that can reach every corner of the state. His focus on equity and excellence for all learners has driven his work at all levels.

His greatest source of pride, however, is his family. Secretary Cardona and his beautiful wife Marissa are the proud parents of two children.