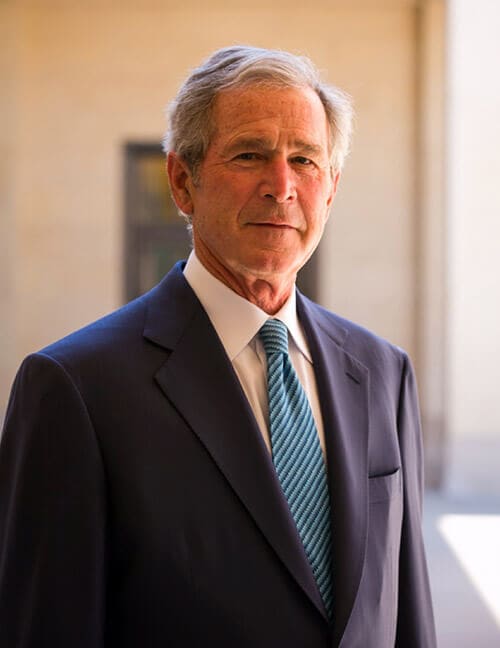 43rd President of the United States

President Bush was born on July 6, 1946, in New Haven, Connecticut, to Barbara and George H.W. Bush – later the 41st President of the United States.  In 1948, the family moved to Texas, where George W. Bush grew up in Midland and Houston.  He received a bachelor’s degree in history from Yale University in 1968 and a master’s degree in business administration from the Harvard Business School in 1975.  He served as a pilot in the Texas Air National Guard from 1968 to 1974.  Afterward, he settled in Midland, where he started an energy business and married Laura Welch on November 5, 1977.  After working on his father’s successful 1988 Presidential campaign, George W. Bush joined a group of partners that purchased the Texas Rangers baseball franchise in 1989.

On November 8, 1994, George W. Bush was elected the 46th Governor of Texas. In 1998, he became the first governor in Texas history to be elected to consecutive four-year terms.

After the Presidency, George and Laura Bush founded the George W. Bush Presidential Center in Dallas, Texas.  The Center is home to the Bush Presidential Museum and Library, which houses George W. Bush’s presidential papers.  The Center also is home to the George W. Bush Institute, a public policy organization that focuses on economic growth, education reform, global health, and human freedom.  The Institute supports the rights of women with its Women’s Initiative and honors those who have served in the United States armed forces through its Military Service Initiative.

President Bush is the author of a bestselling memoir, Decision Points (2010), as well as a book about his father, President George H.W. Bush, entitled 41: A Portrait of My Father (2014).  On February 28, 2017, President Bush released his latest book, Portraits of Courage: A Commander in Chief’s Tribute to America’s Warriors, a vibrant collection of oil paintings and stories by President Bush honoring the sacrifice and courage of America’s military veterans.  He and Laura have twin daughters, Barbara and Jenna, a son-in-law, Henry Hager, and two granddaughters, Mila and Poppy Louise Hager.  The Bush family also includes a dog, Freddy, and two cats, Bob and Bernadette.