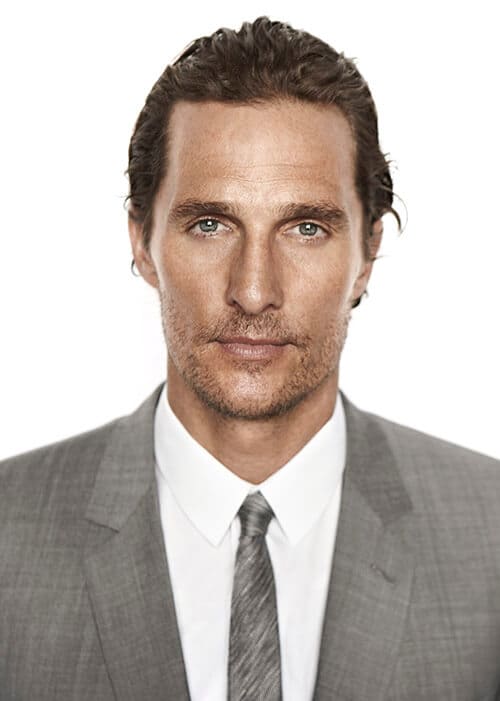 Texas native Matthew McConaughey is one of Hollywood's most sought-after leading men. A chance meeting in Austin with casting director and producer Don Phillips led him to director Richard Linklater, who launched the actor's career in the cult classic "Dazed and Confused." Since then, he has appeared in over 40 feature films that have grossed over $1 billion; and has become a producer, director, and philanthropist - all the while sticking to his Texas roots and "jk livin" philosophy.

Recently he will starred in, the Harmony Korine comedy "Beach Bum", "White Boy Rick" based on a true story and "Serenity", opposite Anne Hathaway. In 2016 McConaughey voiced Buster Moon in the holiday release of Illumination project's 'Sing." The film was a holiday box office success grossing over $600 million at the box office.  In addition that same year he was seen in "Gold", "Free State of Jones" as well as featured as the voice of Beatle in "Kubo and the Two Strings" which was nominated for an Academy Award.

2014 was a game-changing year for McConaughey.  For his riveting portrayal of Ron Woodruff in "Dallas Buyers Club," McConaughey received an Academy Award®, Golden Globe Award, Screen Actors Guild Award and Gotham Award for Best Actor, the Best Actor Award at the Rome Film Festival as well as the Desert Palm Achievement Actor Award at the Palm Springs Film Festival.  He also made the move to TV starring alongside Woody Harrelson in the HBO dramatic series "True Detective." The show was met by rave reviews from critics and fans alike and earned Matthew a Critics Choice and TCA Award for Best Actor in a Drama Series as well as an Emmy Nomination. Later that year he starred in "Interstellar," directed by Christopher Nolan, and also starring Anne Hathaway and Jessica Chastain.
In 2012 McConaughey was spotlighted in four diverse career-changing performances. He won a Spirit Award for his portrayal of Dallas Rising in Steven Soderbergh's "Magic Mike," and was named the year's Best Supporting Actor by both the New York Film Critics Circle and the National Society of Film Critics for his work in "Magic Mike" and Richard Linklater's "Bernie." Mr. McConaughey also received acclaim for his performance in Lee Daniels' "The Paperboy," and was a Spirit Award nominee for playing the title role in William Friedkin's "Killer Joe."

In 2008, Mr. McConaughey started The just keep livin Foundation (www.jklivinfoundation.org), which is dedicated to helping boys and girls transform into men and women through programs that teach the importance of decision-making, health, education, and active living. The Foundation has partnered with Communities in Schools (CIS) - the nation's largest, non-profit, dropout-prevention organization -in West Los Angeles to implement fitness and wellness programs in two large urban high schools. Through an afterschool program, they are able to give kids a healthy start in life and the promise of a healthy future.