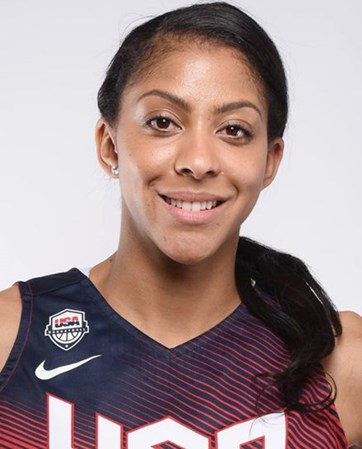 As one of the most decorated women’s basketball players of all-time and a two-time Olympic Gold Medalist, Candace Parker has already solidified herself as one of the most influential athletes of this generation. Both on and off the court, Parker has continued to build a legacy that she hopes will inspire others to break through glass-ceilings as she has. Off the court, she serves as the lone female sports analyst and commentator for Turner.

In 2008, Parker was selected as the No.1 overall pick in the WNBA Draft by the Los Angeles Sparks, following a champion career atTennessee where she led the Lady Vols to consecutive NCAA championships in 2007and 2008. Parker went on to become the first player to earn WNBA MVP and Rookie of the Year honors in the same season and was named Finals MVP after leading the Sparks to the 2016 WNBA title. After 13 seasons with the Los AngelesSparks, Parker signed with the Chicago Sky and won the 2021 WNBA Championship in her first season.

Off the court, Parker launched the first season of her podcast Moments with Candace Parker. Produced in partnership with Wonder Media Network and Robin Roberts, Moments celebrates parenthood to the fullest -- the smallest victories, the messiest failures and the bravest decisions. Each week, Candace chats with friends you might recognize, about stories you've never heard before. The podcast launched onAugust 10, 2021 on all podcast platforms to tons of fan love.

The first WNBA player to appear on the cover of an NBA2K game, Parker was featured on the cover of the WNBA 25th Anniversary SpecialEdition, released on September 10, 2021. Parker was also the 1st WNBA player to sign with 2K last year and brought the WNBA onto the platform for the first time. She also became the first active player – male or female – to be an in-game analyst in the 2K broadcast booth.

Parker was recently featured in Disney+’s docuseries, Becoming, produced by LeBron James and Maverick Carter.She has always had a love for creating content with plans to launch her own production company in the near feature.

Currently, Parker has endorsement deals with Adidas,NBA 2K, Band-Aid and JBL Audio and has previously worked with brands such asGatorade, Budweiser and more.  In 2019, Parker closed a multi-year deal to serve as an analyst and commentator for the NBA on TNT, NBA TV and NCAATournament coverage and is seen as a rising star on the broadcast world. Most recently, Parker and her 11-year-old daughter became co-owners of the AngelCity FC National Women's Soccer League expansion team that is expected to begin play in 2022.

As a mother and a Black woman, Parker has developed into a bold, insightful and inspiring thought leader who is passionate about the importance of women’s rights, voters’ rights and Black Lives Matter. InSeptember of 2020, Parker was the first women to join the Social Change Fund, the mission of which is to invest in and support organizations that are working to liberate Black people and advocate for indigenous people and communities of color through the lens of policy solutions, community representation and narrative change. With her heart, passion and competitiveness, Parker is already a role model for so many with much more to come.