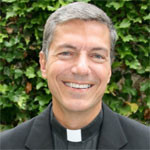 Steve Katsouros, S.J. is president/CEO of the Come To Believe Network, as well as the founding dean and former executive director of Arrupe College at Loyola University Chicago. Arrupe is a two-year college at Loyola’s Water Tower Campus that continues the Jesuit tradition of offering a rigorous liberal arts education to a diverse population, many of whom are the first in their family to pursue higher education. To date, Arrupe College has enrolled five classes and graduated three classes. In his study of higher education, THE MOST IMPORTANT YEARS: HOW COLLEGE CAN MAKE OR BREAK YOU (2019), author Paul Tough observed Arrupe College “may be doing a more impressive job of keeping its students enrolled and on track for success than any other institution I visited.” Prior to arriving in Chicago, Fr. Katsouros served as the director of the Institute for Catholic Educational Leadership and associate dean of the School of Education at the University of San Francisco. From 2002 until 2011 Fr. Katsouros was president of Loyola, a coed Jesuit high school in New York City. His doctorate, from Columbia University Teachers College, is in organizational leadership; his research interests are leadership; governance; and institutional performance. He has worked as a service program director, dean of students, and advancement director. Currently, Fr. Katsouros is a trustee on the boards of Cristo Rey Jesuit High School, Chicago; Regis University, Denver; and Saint Mary’s College, South Bend. He delivered the Cardinal Bernardin lecture at Georgetown University in March 2017. His book about the launch of Arrupe College, COME TO BELIEVE: HOW THE JESUITS ARE REINVENTING EDUCATION (AGAIN), was published by Orbis Press in June 2017 and received an award from the Christophers in 2018. In 2019, Fr. Katsouros served on Chicago Mayor Lori Lightfoot’s education transition committee.