Join Our Newsletter to Stay in the Know
Interested in the 2022 GSV Cup? Sign Up Now to Stay Up-to-Date
Speakers / Daniel Ferguson 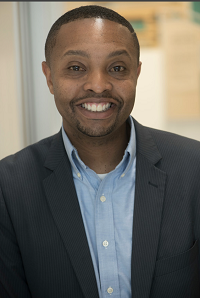 Daniel Ferguson serves as the Director of Workforce Development at the Los Angeles Cleantech Incubator (LACI). Daniel has over 10 years of workforce development experience in assisting at-risk and unemployed youth and young adults. Prior to coming to LACI, he worked at Job Corps for six years. In his last role at Job Corps as the Director of Operations, he had oversight of KPIs, training, compliance and performance metrics for nine career placement contracts. During his tenure, he was ranked #1 in the nation for contract performance. He is also Co-Founder of Ezrach Brain Trust Association (a environmental and economic development social enterprise), an Adjunct Professor for the School of Business Management at National University,  and an LA native who resides in Leimert Park with his wife and two children. Daniel earned his MBA from the Graduate School of Nonprofit Management at American Jewish University and a Bachelor of Arts in Sociology from California State University, Los Angeles. Since joining LACI, he has developed an affinity for clean technology and enjoys assisting LA County residents with securing good-paying green jobs through initiatives such as the Advanced Prototyping Center (APC) Fellowship.