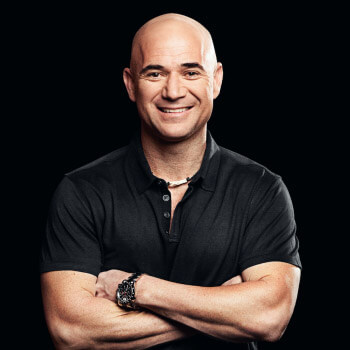 After turning pro at the age of 16, Andre Agassi rose to international fame, earning 60 men’s singles titles including eight Grand Slam titles.  A former World No. 1 player, Agassi is the only American to win all four Grand Slam titles and an Olympic Gold medal.  His career spanned 20 years, with more than 860 career matches won.  On July 9, 2011, he was inducted into the International Tennis Hall of Fame.

Off the court, Agassi established the Andre Agassi Foundation for Education, which has raised more than $185 million dollars for at-risk children in Las Vegas since 1994.  The Foundation focuses on transforming public education so that all children have a shot at success, and in 2001, the Andre Agassi College Preparatory Academy, a tuition free public charter school opened with 1,200 children in grades K-12.

Most recently, Andre launched Square Panda, an award-winning educational technology learning system utilizing phonics with multi-sensory play.  Designed for kids two and older, the playset blends physical and digital learning as it keeps kids entertained through age-appropriate learning games grounded in research-based curriculum.  Square Panda’s mission is to give children the tools to become fluent, confident readers, and empower them to love reading.